There are approximately 542 centerline miles of County maintained roadways within the unincorporated area (2019). This is considered the County road network. Roads and highways within Ventura County consist of an interconnected network of federal and state highways, as well as county, city, and private roads. Private roads are not maintained by the County. The connections between these roadway systems play an important role in facilitating local, inter-county, and interstate travel. These roadways provide access to local and regional destinations, such as employment areas, shopping centers, schools, recreational areas, and residential communities. The County has designated a subset of roadways as the Regional Road Network comprised of state-, county- and city-maintained roadways. The Regional Road Network facilitates inter-city, regional and interregional travel shown in Figure 4-2. Ventura County defines its roadways by functional classification shown in Figure 4-3. The Federal Roadway Functional Classification system as applied to Ventura County is shown in Figure 4-4. Federal classifications are directly tied to federal funding eligibility. The highest federal priority network is the designated National Highway System (NHS). Roadways designated as part of the NHS in Ventura County, some of which are County-maintained roadways, are shown in Figure 4-5. The latter roadways are subject to performance monitoring and targets as established in the National Performance Management Rule (23 CFR Part 490).

In total, the County maintains 58.2 miles of bike lanes – all but 1.56 miles are located within the shared roadway right-of-way (Class II or Class III). There are currently no Class IV bike facilities in the unincorporated areas of the County. The bikeway network in Ventura County is provided in Figure 4-7. Provision of transit service is dependent on the roadway network. Transit routes serving Ventura County are shown in Figure 4-8.

Planning for roadways near areas of new discretionary development can ensure that the roadway system maintains sufficient capacity and mobility. This section describes how the County will maintain and improve the quality of the county roadways to efficiently move people and goods on the highways and roads within and through the county.

The Ventura County Transportation Department’s priorities are public safety, ensuring roads are safe for use when used with due care in a manner in which it is reasonably foreseeable that they will be used; preservation of infrastructure; and preservation and maintenance of the public’s multi-billion-dollar investment in roads, bridges, and other facilities associated with the County road system. When funds are available, the County will strive to make operational improvements to specific areas of the road system as detailed in the Public Works Capital Improvement Plan.

To ensure the design, construction, and maintenance of a safe and efficient roadway system for the movement of persons and goods.

The County shall require evaluation of County General Plan land use designation changes, zone changes, and discretionary development for their individual (i.e., project-specific) and cumulative transportation impacts based on Vehicle Miles Traveled (VMT) under the California Environmental Quality Act (CEQA) pursuant to the methodology and thresholds of significance criteria set forth in the County Initial Study Assessment Guidelines.
RDR

County General Plan land use designation changes, zone changes, and discretionary development that would cause an individual (i.e., project-specific) or cumulative significant transportation impact based on Vehicle Miles Traveled (VMT) under the California Environmental Quality Act (CEQA) shall be prohibited unless:

a. LOS-'C' for all Federal functional classification of Minor Collector (MNC) and Local roadways (L); and

b. LOS-'D' for all Federal functional classifications except MNC and L, and Federal and State highways in the unincorporated area, except as otherwise provided in subparagraph (c and d;

d. LOS ‘F’ for Wendy Drive between Borchard Drive to Lois Avenue; and

e. The LOS prescribed by the applicable city for all federal highways, state highways, city thoroughfares and city-maintained local roads located within that city, if the city has formally adopted and is implementing a General Plan policy, ordinance, or a reciprocal agreement with the County regarding development in the city that is intended to improve the LOS of County-maintained local roads and federal and state highways located within the unincorporated area of the county.

b. Would add traffic to existing roads within the Regional Road Network or County-maintained roadways that are currently functioning below an acceptable LOS; and

c. Could cause future roads planned for addition to the Regional Road Network or Countymaintained roadways to function below an acceptable LOS.

d. The Level of Service (LOS) evaluation shall be conducted based on methods established by the County.

2. County General Plan land use designation changes, zone changes, and discretionary development that would individually (i.e., project-specific) cause an unacceptable LOS effect as determined pursuant to Policies CTM-1.3 and CMT-1.4 shall be prohibited unless the improvements to the roadway and intersections are included in the Public Works Agency, Transportation Department Strategic Master Plan with a funding mechanism identified and the project is conditioned on the payment of a fee proportional to the project’s fair share of unacceptable LOS effects.

a. Farmworker Housing Complexes and other housing exclusively for lower-income households.

b. Affordable housing developments, pursuant to Article 16 of the Non-Coastal Zoning Ordinance, where such developments are served by roads that are currently operating at LOS “E” or better;

d. Agriculture and Agricultural Operations as permitted in the Coastal and Non- Coastal Zoning Ordinances, where such developments are served by roads that are currently operating at LOS ”E” or better;

e. The unacceptable LOS exists on a City-maintained road or federal or state highway located within a city unless the applicable city has formally adopted and is implementing a general plan policy, ordinance, or a reciprocal traffic impact mitigation fee agreement with the County regarding development in the city that is intended to improve the LOS of County-maintained local roads and federal and state highways located within the unincorporated area of the county;

f. Allow LOS “F” for Wendy Drive and maintain as two-lane road; and

County General Plan land use designation changes, zone changes, and discretionary development within the boundaries of the Ojai Valley Area Plan are subject to the Level of Service goals, policies and programs in the Ojai Valley Area Plan and not subject to Policies CTM-1.3, CTM-1.4 and CTM-1.5.
The County shall require discretionary development that would generate additional traffic pays its pro rata share of the cost of added vehicle trips and the costs of necessary improvements to the Regional Road Network pursuant to the County’s Traffic Impact Mitigation Fee Ordinance.
RDR

1. Any existing road within the County’s Regional Road Network, or any existing Countymaintained local road, that is currently functioning at an acceptable Level of Service (LOS) to function below an acceptable LOS pursuant to Policy CTM-1.2;

2. Any existing road within the County’s Regional Road Network, or any existing Countymaintained local road that is currently operating below an acceptable LOS, as determined pursuant to Policy CTM-1.2, to have a worsening of traffic conditions; or

3. Any project that will create a significant unavoidable transportation impact pursuant to Policy CTM-1.1; or

4. Any future road planned for addition to the County’s Regional Road Network, or any planned future County-maintained local road, to function below an acceptable LOS as determined pursuant to Policy CTM-1.2).

This policy does not apply to those cities which have formally adopted General Plan policies, ordinances, or a reciprocal transportation impact mitigation fee agreement with the County similar to Policies CMT-1.3, CMT-1.4,.and CMT-1.5.

RDR
The County shall coordinate with Caltrans and Ventura County Transportation Commission (VCTC) to monitor the performance measures and targets established by Caltrans and Southern California Association of Governments (SCAG) for compliance with the National Performance Management Measures Rule for all roadways designated as part of the National Highway System in Ventura County, including some portions owned or maintained by the County.
SO
The County shall strive to direct interregional traffic to federal and state highways. Improvement to County roadways shall not be for the primary purpose of relieving congestion on federal or state highways.
SO
EJ
HC
The County shall coordinate with Caltrans and cities to ensure that truck routes are appropriately designed and designated for the safe and efficient movement of goods throughout the county, particularly to the Port of Hueneme.
IGC
The County shall coordinate with Caltrans, cities, and major shipping entities to improve and enhance the Surface Transportation Assistance Act (STAA) Terminal Access routes and STAA network connectivity between and among goods movement modes and facilities (e.g., truck routes/terminals, railroads/yards, shipping lanes/ports, and air-transport/airports). This will include at a minimum adequate STAA Terminal “T” and “S” signage as appropriate to improve wayfinding and access to the National STAA Network.
IGC
The County shall work with the Naval Base Ventura County (NBVC) to determine the feasibility of grade separations on unincorporated segments of NBVC mobilization corridors/Strategic Highway Network (STRAHNET) (Figure 4-5) to increase mobility and allow for uninterrupted mission operations and military readiness.
IGC
The County shall work with Union Pacific Railroad, the Port of Hueneme, owner of the Ventura County Railroad, Caltrans, cities, and the Ventura County Transportation Commission (VCTC) to continue to enhance roadway safety along railroad grade crossing surfaces through improvements including the installation of concrete railroad grade crossing surface panels.
IGC
SO
The County shall work with Naval Base Ventura County (NBVC) and neighboring jurisdictions to enhance circulation for identified roadway mobilization corridors/Strategic Highway Network (STRAHNET) (Figure 4-5).
IGC 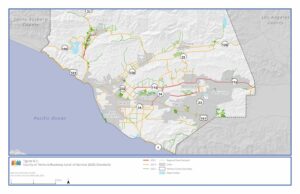 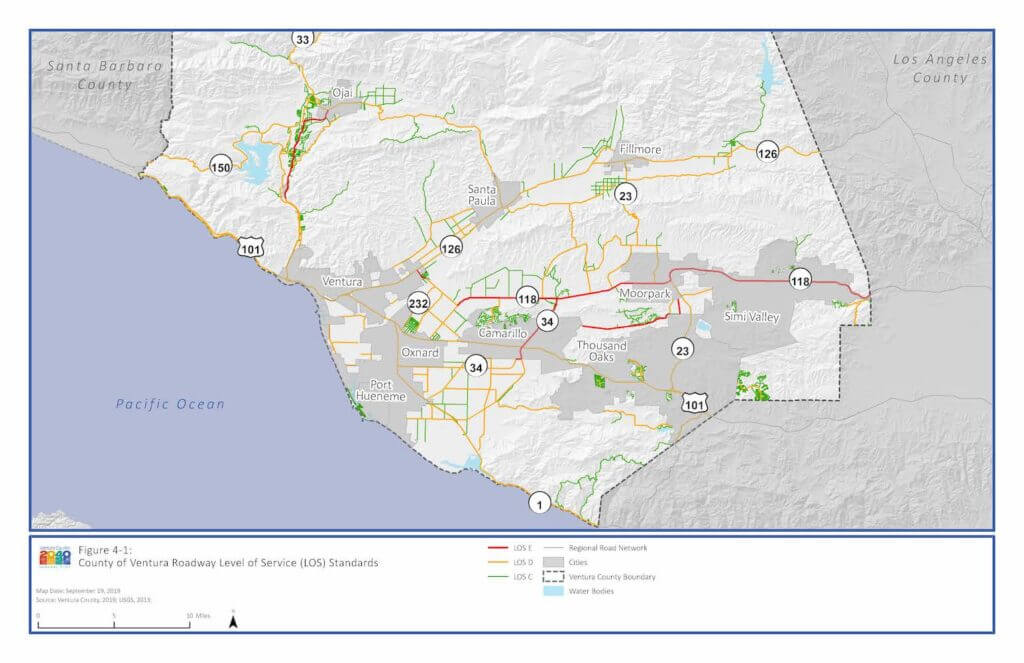 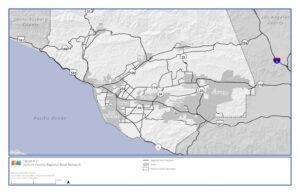 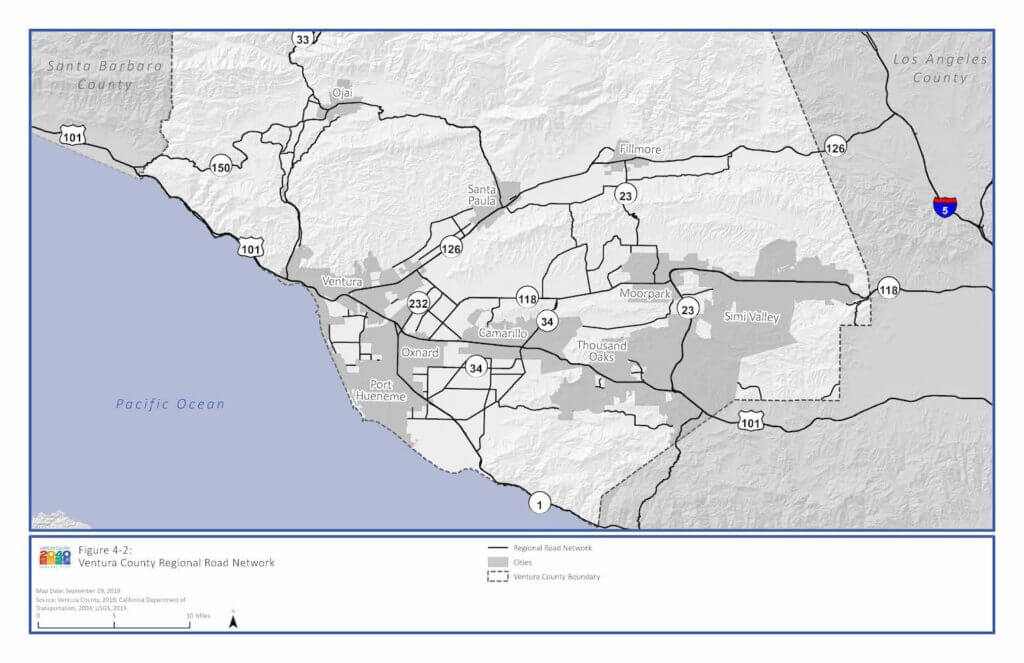 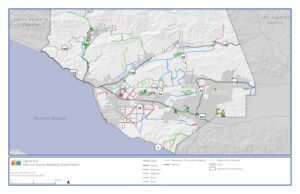 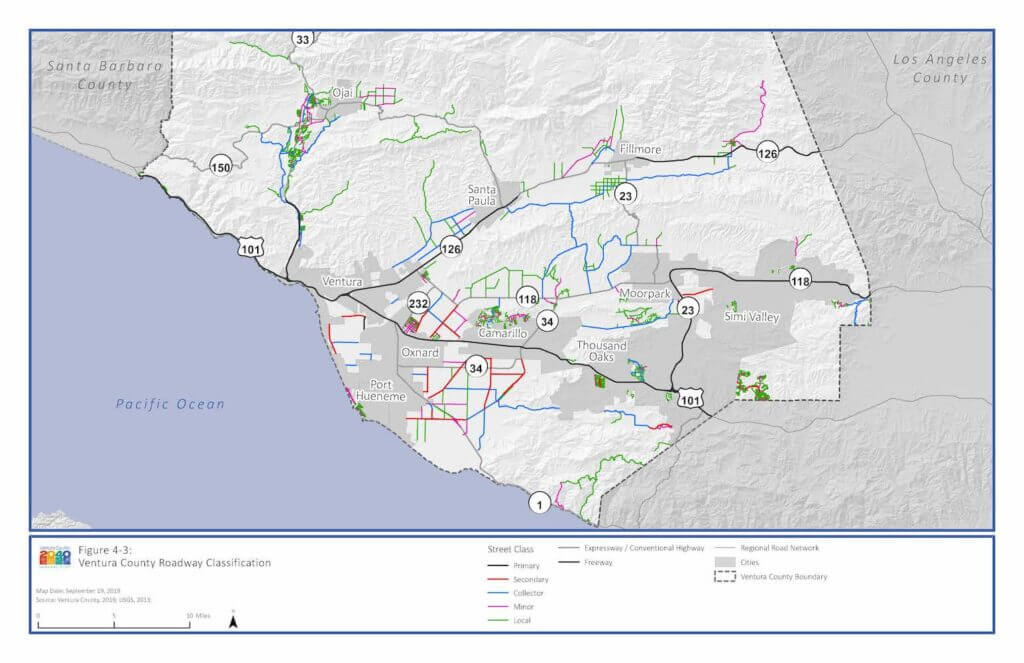 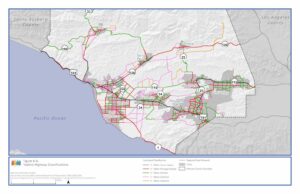 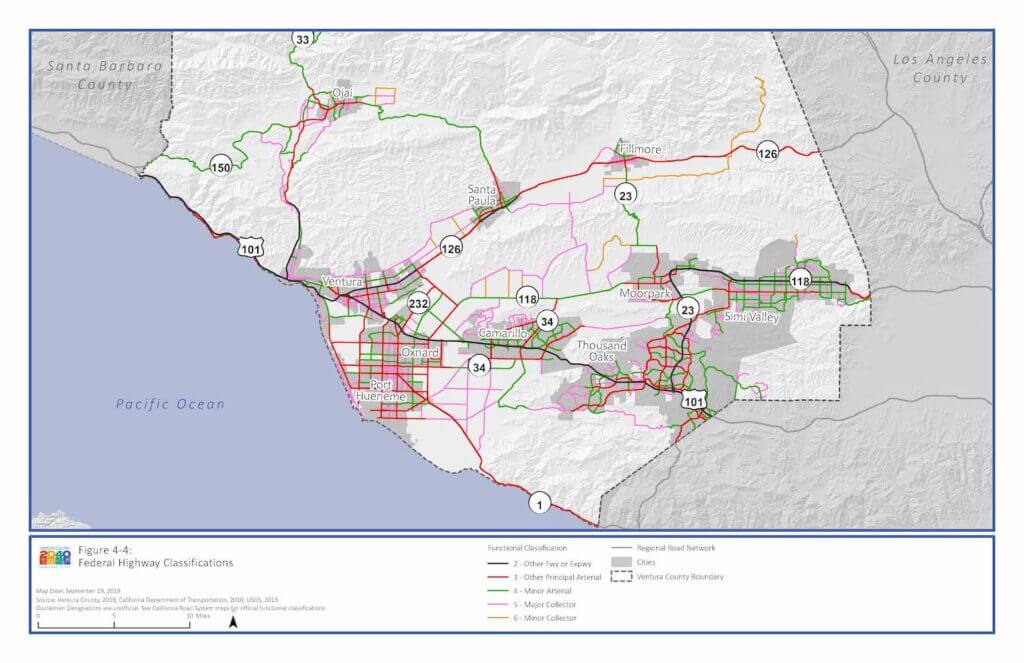 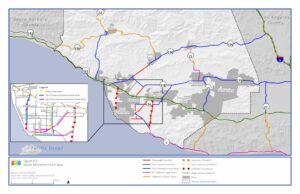 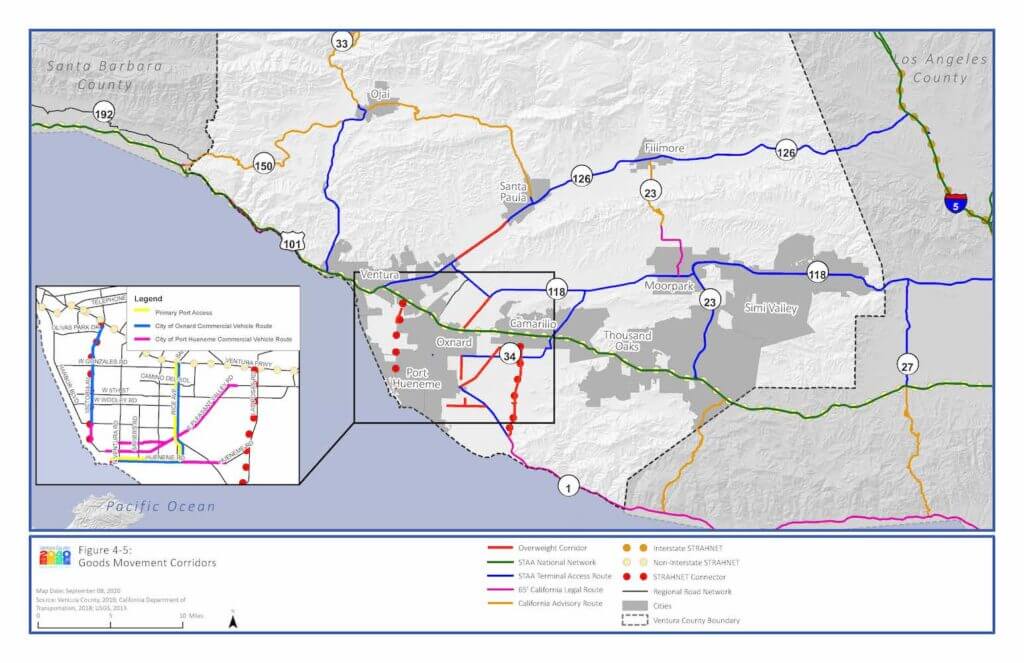 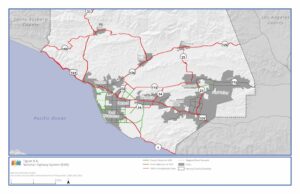 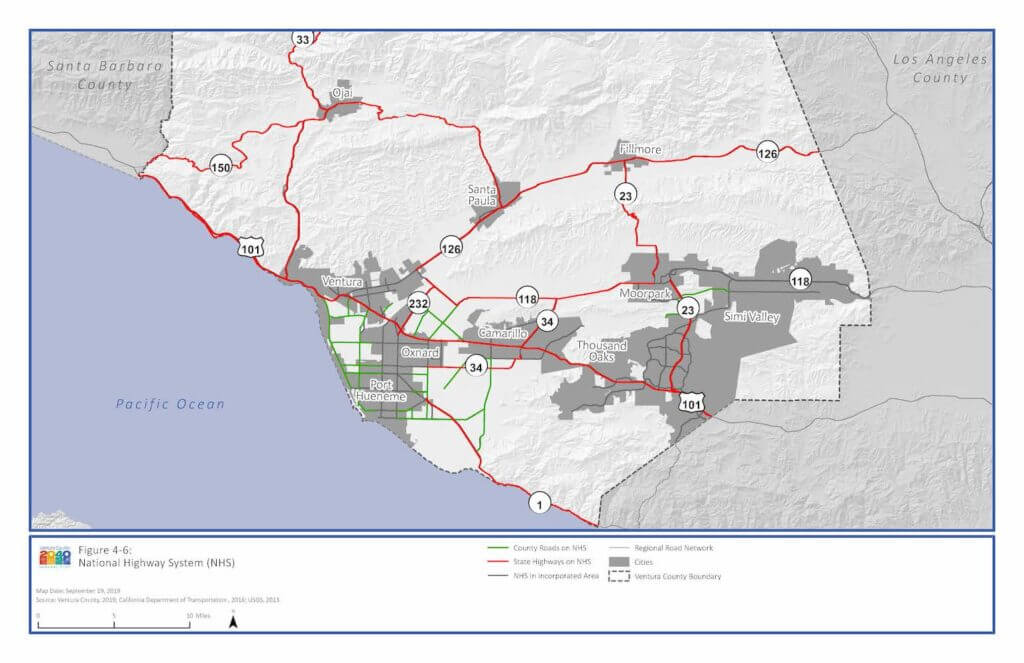 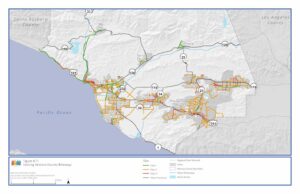 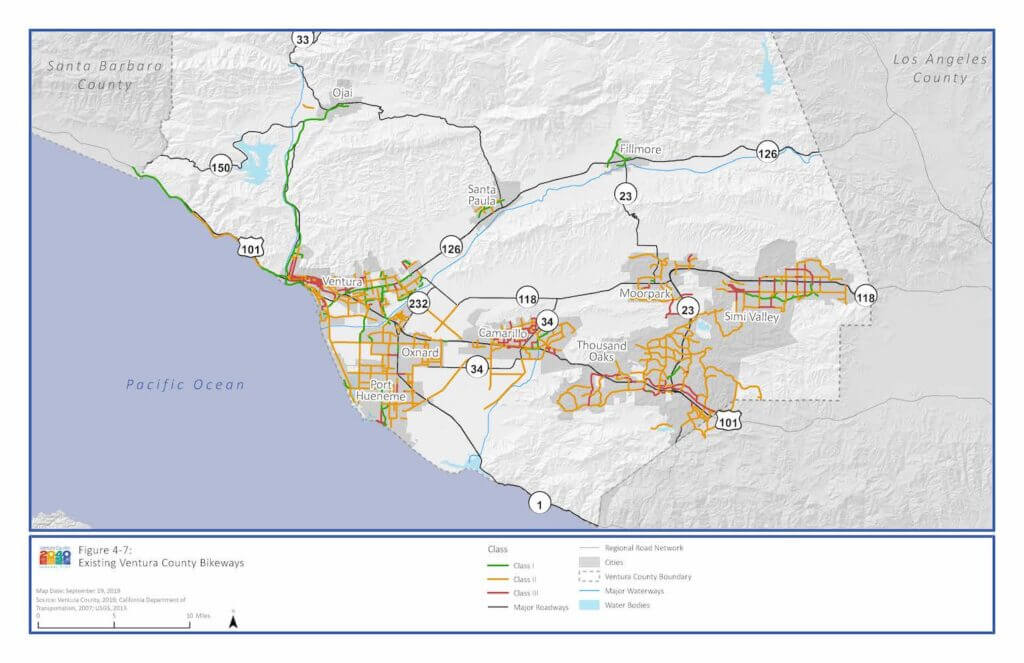 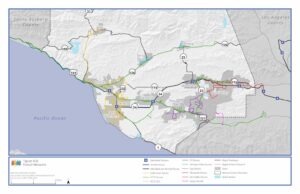 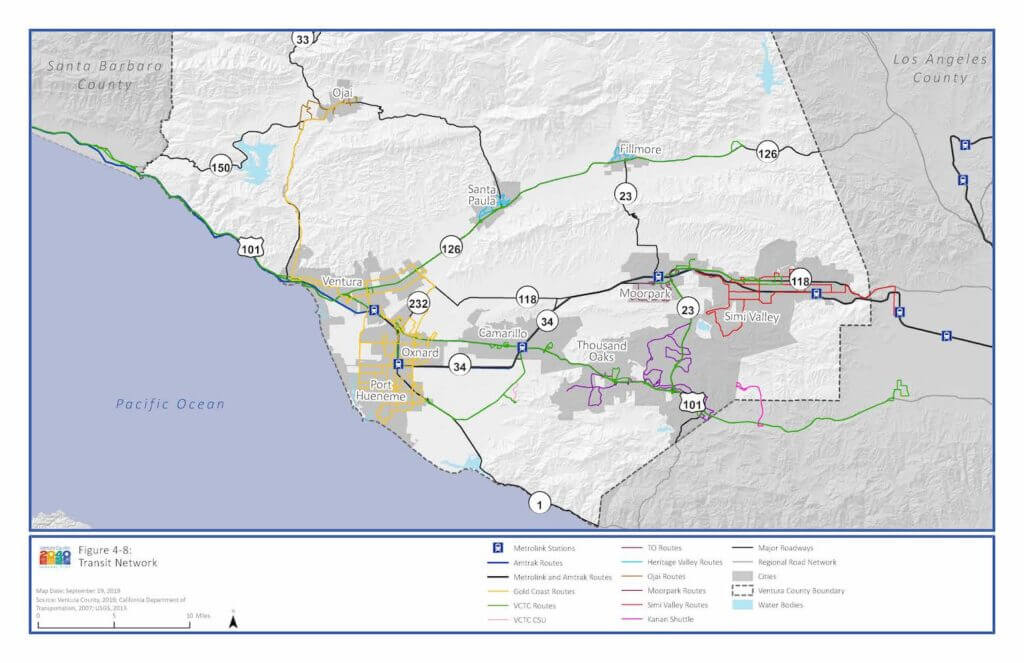